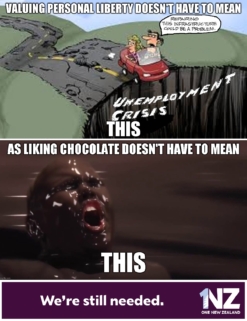 Jordan Peterson recently wrote: “The moderates on the right must differentiate themselves from the extremists on the right. The same applies to the left. And those same moderates must seek out their willing counterparts across the ideological divide and work with them.”

One political philosophy that is commonly considered toward the so-called ‘right’ is libertarianism. If you define ‘libertarian’ as “seeking to maximize autonomy and political freedom, emphasizing free association, freedom of choice, individualism and voluntary association”, then 1NZ is very much libertarian. Yet as Jordan Peterson correctly observes, political philosophies always require moderating via a process of dialogue. A correct response to libertarianism is that people are only free to make choices and so actualise personal responsibility, to the extent they live in a ‘well enough’ managed economy that allows them some dollars in their pockets after paying their taxes to be able to make those more responsible choices. We agree. This is why we take economics seriously, and why we have taken the time to learn the macroeconomic impacts of a monetarily sovereign nation’s various fiscal policy options (known as Modern Money Theory).

To make a freer and more peaceable society possible, government (the currency issuer) – unlike our current Labour Government – generally needs to tax less than it spends, particularly with tax cuts at the production and consumption base of the economy, while leaving enough ‘net dollars’ to allow full employment and the financial wherewithal of ordinary people to be able to choose their ‘voluntary associations’, rather than being compelled by a needlessly low-wage and over-taxed economy to work long hours, requiring two incomes to support a family for example.

Our first action would be to abolish our regressive GST and remove all income taxes on the first $35K of earnings. Do the math to calculate how much easier that will make your week and you will understand why this is our policy. And no, we don’t need to increase taxes elsewhere to the same amount as the tax cuts in order to ‘balance the books’. Government is the currency issuer, so it doesn’t need to try to ‘balance the books’, no more so than it needs to have its employees stand on one foot. It needs to balance the economy and infrastructure to the needs of the people, while keeping employment full and inflation low. As we see it that’s the core responsibility of governance.

We see neoliberalism as the antithesis of liberalism or libertarianism. In professing that ‘liberalism’ and ‘free trade’ can sit compatibly alongside fiscal austerity and regressive taxation (such as GST as introduced in NZ late 1986, a tax that ironically places a penalty directly onto trade), this bizarre mishmash of conflicting ideologies and doublespeak has increased involuntary unemployment, wage-slavery, and private debt, while exacerbating the centralisation of power toward ever larger corporations and media/internet conglomerates. Thereby reducing the financial resources of people and communities – not to mention intellectual freedoms – and so progressively eroding our abilities as individuals – and ultimately as a nation – to make our own choices regarding education, local/cottage industry, housing, food, health, and so on.

The private sector can fulfill many societal needs. But it can’t fulfill all societal needs. Government has to take an active roll in organizing the provisioning of infrastructure for instance. Decades enduring railways and highways are examples of services and structures that the private sector will never organise and provide on a national scale, since businesses are beholden to yearly or quarterly profits. Private companies can build the bridges and the tunnels, but government needs to mobilise resources and labour and make it happen by paying those companies with the dollars it is chartered to wisely and sufficiently issue.

The key here is balance, and as Peterson points out, moderateness. We need to avoid the pitfall of getting hyped up thinking it possible to ubiquitously apply a single ideology or philosophy to ALL systems and situations. Same goes for the oversimplifying assumption that there even is a ‘left’ perspective and a ‘right’ perspective. We need to admit the fact that ideas and people are more multidimensional than to be neatly positioned along a one dimensional continuum.

Reality has a lot of nuance to it, and so we have to get out of our ‘bubbles’. We need to seek out those with different (yet moderate) philosophies and begin the conversations that will lead us to our common grounds and common humanity. Then I believe we will begin to solve our problems.

Want to join the discussion?
Feel free to contribute!