The English Draft of the Treaty of Waitangi

The document the Government don’t want you to know about

In 1975 when the Labour Party decided they would legislate to elevate the status of Maori in New Zealand, they opened the files containing the returned and signed copies of Te Tiriti o Waitangi.

These files had been left largely untouched after the signing of the treaty as New Zealanders had simply got on with the task of building one nation from the many nations, that had lived separately in New Zealand prior to the agreement (the treaty).

The files contained some of the early drafts in English of attempts to put together the articles of the treaty in the hand writing of William Hobson, James Freeman and James Busby. There were also nine copies of the signed treaties that were circulated around New Zealand in 1840, the Waitangi Treaty, the Opitiki Treaty, the South Island Treaty, the Queen Charlotte Treaty, the East Coast Treaty. the Kawhia Treaty, the Printed Sheet used at Waikato Heads and page two of the Printed Sheet, an English text version of the treaty that was used to gather the signatures that would not fit on page one of the Printed Sheet used at Waikato Heads. That second page had a wax seal on the top left hand corner affixing it to the first page (see below).

With no full English text draft of the treaty in the files, the historians and government officials incorrectly thought that page two of the Printed Sheet (in English) used at Waikato Heads to gather signatures was the treaty in English. This is despite the fact that the date on the document is the 6th of February, two days after actual English draft was completed and that the words and meanings on the English document did not match the words and meanings on the native language document.

It was because of the apparent differences in the words and meanings of that one English text document, and all the native language signed documents, that through the Treaty of Waitangi Act 1975 legislation they set up the Waitangi Tribunal. This tribunal operates within the Justice department of our government and the legislation states that “In fulfilling this role, the Waitangi Tribunal has exclusive authority to determine the meaning and effect of the Treaty. It can decide on issues raised by the differences between the Māori and English texts of the Treaty.”

Through this tribunal the government have confused the people of New Zealand and changed the meanings of the words in the treaty as they have wished.

Except that without an English text draft that matched Te Tiriti, that document was all they had in 1975.

Fourteen years later though, in 1989, Mr John Littlewood and his sister Beryl Needham, descendants of Henry Littlewood, the solicitor of  the US Consul in 1840, James Reddy Clendon, found a document in an envelope marked “Treaty of Waitangi”. They handed the document to the Auckland Institute and Museum who kept the document for several months. Eventually it was proposed that the document is the missing English draft of the Treaty of Waitangi.

In September 1992 someone leaked to he media that the document could be of historical importance as the missing English draft of the Treaty. Despite this,  the National Archives and related authorities went silent and suppressed the document, the find of which had worried them greatly when news was made public. To this day they still have not performed their duty to the people of New Zealand and have never admitted that they have in their possession the final English draft of the Treaty of Waitangi. This is because to do so would severely curtail the activities and huge plundering potential of the treaty grievance industry, which relies on the wording of the wrong English draft in order to survive and continue to perpetrate its fraud against the people of New Zealand.

Below is the James Busby hand written English draft of the Treaty of Waitangi on the left and the Henry and Edward Williams native language translation from it (Te Tiriti o Waitangi) on the right.

Note in the preamble the treaty is addressed to the chiefs and the people of New Zealand, not Maori. The purpose of the treaty was to maintain peace as there had been 602 significant tribal battles where between 35 and 45,000 people had died. Another reason for the treaty was to stop land sales by the chiefs, they had sold 2/3rds of the land mass of new Zealand leading up to the signing of the treaty.

Note in Article One that sovereignty is mispelled and that the native word translated for sovereignty was Kawanatanga.

Note below in Article Two, the Queen “confirms and guarantees to the chiefs and tribes and to ALL THE PEOPLE of New Zealand the POSSESSION of their land and that the word chosen in the native language for POSSESSION is TINO RANGATIRATANGA .

Note also in Article Two, that the words “all their property’ were translated into the native language “o ratou toanga katoa”. This completely puts to bed the notion that the word “toanga’ meant ‘treasures’ all things tangible and intangible.

Note in Article Three,  that the chiefs agreed to leave the tribal hierarchy behind and become subjects of the queen with equal rights and privileges. They had agreed to the introduction of  a single standard of citizenship.

Also note in Article Three that where James Busby wrote “the people of New Zealand” Henry and Edward Williams added in their translation the word ‘maori” (small ‘m’) i.e. tangata ‘maori’ katoa. They did that because in 1840 there was no political or social construct in New Zealand known as Maori and the word ‘maori’ simply meant ‘ordinary’,  they had effectively changed the words “the people of New Zealand” to ” the ordinary people of New Zealand”. They did that because the dropping of the hierarchical ways of old by the chiefs was a monumental shift in New Zealand society and also that although it was the chiefs who ceded sovereignty it was not just them that gained the protection and rights and privileges as British subjects it was also “all the ordinary people”.

What is the English text Treaty used in the legislation and taught in our schools and why was it signed?

On April 11th, 1840, Rev Maunsell stood before 1500 natives at Port Waikato and read the official and solitary, Native-language treaty to the assembly. He was obliged to work from the “printed native-language sheet” produced on the CMS Mission press by Reverend William Colenso (mission printer) on the 17th of February 1840.

They had to use the printed native language sheet as the official hand written ‘Kawhia Treaty’ had not made it in time for their meeting. On the printed sheet there was very little room for signatures and so only five made it on to that document. Rev Maunsell also had with him an English text ‘Formal Royal Style’ treaty which had been written by James Freeman.

Freeman had taken it upon himself to forward over to Maunsell a ruined copy of one of his “Formal Royal Style” versions in English. Earmarked for overseas dispatch only, it had been ruined when Hobson had attempted a “left-handed” signature at the height of his stroke (between the 1st and 4th of March).

Maunsell used that document, that had different words and meanings to the native language document, to gather the rest of the signatures at Port Waikato and glued it behind the printed sheet with wax. It was an appendix to the printed native language text document read to crowd at Port Waikato. This is the document that the government in 1975 incorrectly inserted into our legislation and fuels the treaty grievance industry with it’s different words and meanings.

Yet since 1989 the government have the correct English text treaty draft in their possession, they had the opportunity in 2002 when the media raised issue that it could be the missing English draft of the Treaty, but they refuse to acknowledge it and have in fact poured scorn on the document. It appears that they are defrauding the people of New Zealand as this  document calls into question every treaty claim made in New Zealand since 1975.

The Printed Sheet read to the crowd at Port Waikato 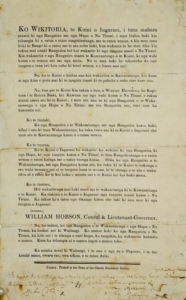 The ruined English text Treaty used to gather the carry over signatures and stuck behind the Printed Sheet. 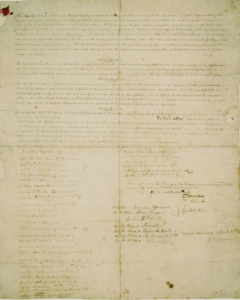 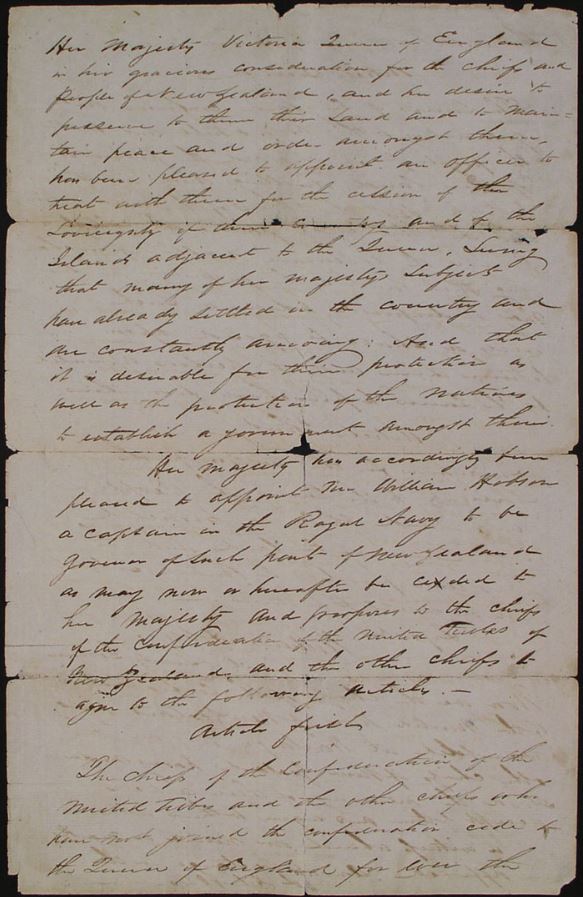