A Vision for Our Future, The People

Possibly the most important part of any human life is the ability to reproduce at a sustainable rate into a responsible society. While we all have a role to play one way or another in shaping the society in which we live, the consequences are not always understood if we don’t produce people who fully understand that. A healthy society is one where the importance of and how to have good relationships is taught, along with how to raise children to be responsible adults that fit into a sustainable society.

All marriage or relationship counseling will be state-funded.

Children will be taught that they are individuals and that all humans are related. Students will be free to define themselves as they wish, Maori, Pasifika, Asian, European as examples, however, they will understand that self-definition is a personal thing and that during school hours they are defined only as male or female students.

Currently, the New Zealand Government operates the Health Sector based on the ‘Germ Theory’. The Germ Theory states that left to their own devices almost all humans will get sick or become diseased. Pharmaceutical companies then invent treatments that alleviate those symptoms. This system of health ignores the health of individuals producing pills or injections as a one solution fits all. It does not promote healthy living and is enormously expensive for both individuals and the whole country alike. As witnessed during the extremely divisive COVID-19 affair, people became poor, governments became poorer and pharmaceutical companies became extremely wealthy.  Operating under the Germ Theory invites corruption at every level, including collusion between lobby groups and political party’s running for office.

Instead, the government will operate the Health Sector based on the ‘Terrain Theory’. The Terrain Theory states that if a human is fueled correctly (diet) and behaves appropriately (basic exercise and lifestyle), they will rarely become sick, but when they do they will have very strong immunity to almost all pathogens. The goal is to lessen the requirement for hospital treatment for New Zealand citizens, and to improve the quality of care that is offered.

The Terrain Theory will become part of the New Zealand education system so that citizens will live healthily as children and then all through their lives. The benefactors will be the people themselves, their families, the employers who will have a much healthier workforce. Also, the country as a whole will benefit because productivity will be up and the requirement for social services will be down.

The only industry that will suffer massively will be the pharmaceutical corporations, however, given how distrustful that they have proved to be that’s probably a good thing.

We will not attempt to eradicate COVID-19 or any further variants. We will not force people to vaccinate should an effective vaccination ever come on to the market. We will also not enforce lockdowns on the general public or businesses.

Instead, we will repeal the COVID-19 Public Health Response Act that overrides the Bill of Rights and look to better protect the vulnerable, elderly, or infirmed. We are in favour of social distancing and strict hygiene during high infection times, but will not make mask-wearing compulsory.

New Zealanders will continue to live with viruses as we have always lived with them. With that in mind, only sick people will be asked to self-quarantine and apart from normal border restrictions all travel is free. Through the Ministry of Health, an emphasis will be placed on methods of strengthening our immune systems by exercise, diet and keeping good health.

We will invest in technology that is both sustainable and exportable to the wider world.

The New Zealand Government will no longer be involved in poisoning our soils and animals in a nonsensical effort to restore an ecosystem that existed hundreds of years ago.

See our One New Zealand Party statement on 1080.

New Zealand does not have a gun problem and the gun buy-back laws have not prevented any unauthorised or illegal gun ownership. It has merely made responsible gun owners criminals and then by paying them for spare or unwanted parts or paraphernalia they have enabled them to buy more (legal) guns.

Any changes to the previous gun laws will be done through consultation and careful analysis, not a knee jerk ideological approach.

There will be a review of the family court system to ensure that there is no gender bias in court rulings.

The One New Zealand Party strongly refutes the IPCC report that “Multiple studies published in peer-reviewed scientific journals show that 97 percent or more active publishing climate scientists agree: Climate-warming trends over the past century are extremely likely due to human activities.”

The IPCC report is purely climate alarmist propaganda and there is equally strong or stronger evidence that 97% of their computer models have been proven to be consistently wrong, that warming occurred before CO2 levels rose, not after, and that for most of earths history life flourished with CO2 levels and the temperature significantly higher than now.

We will end the sale of carbon credits.

Banning new oil exploration was an ideological action by the Labour Party, not an action proven to benefit New Zealand.

For too long animal welfare has been ignored as successive governments have run a limited money supply model. Given a limited government spending probably quite rightly, humans have been prioritised above animals. The animals have instead relied on the donations and the unpaid time of an army of volunteers.

The One New Zealand Party recognise the importance of animals and their welfare and understand how to issue currency productively. We will invest in regional shelters and we need an independent national animal welfare commission.

This policy is to prevent people from corrupt countries, with corrupt economies, taking huge amounts of currency from their countries and buying up land in our country.

Appropriate security clearances, minimum English comprehension, and a commitment to assimilate will all be prerequisites. 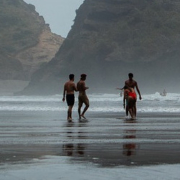